To exist in a globalized world, Germany needs to move faster

The US is building trade barriers, and since the BREXIT decision, the UK has been trying to strike individual trade deals with the world. This does not mean globalization is ending, but it is slowing down, the catchword being ‘slowbalization’ (see part 1 of my analysis). But what does that mean for Germany?

Is our positioning in education, innovation, reliability, quality, and infrastructure good enough to lastingly withstand international competition? China is vehemently occupying a former domain of Germany: the standardization organizations. This is a clear sign of increasing competition. Whoever sets the standards prevails. The country has already overtaken us in terms of internet infrastructure, as well as in railway technology, chip and computer construction, plus many areas of household and consumer electronics. The sheer dimension of Chinese infrastructure, ports, rail links, airports, schools, universities, etc., sets them apart. The next domain in which China is taking a swipe at us is mechanical engineering.

Dependence on China due to the coronavirus pandemic

The coronavirus crisis provides a second argument for curbing globalization. At the beginning of the crisis, there were not enough face masks and face shields in Germany, as well as other medical items such as gloves or protective clothing, as such products are no longer produced in Germany due to unit cost disadvantages. This dependency on other national economies, especially the Chinese economy, which alone had enough capacity and know-how to gradually eliminate the bottlenecks, is loudly criticized.

It is obvious that the German government and economy have neglected the obligation to provide and ensure civil protection. Since there has been no such pandemic since the Spanish flu a hundred years ago, everyone in a position of power was unaware of the risk. That also applies to the private sector. It is doubtful that anyone in Germany stocked up on face masks or toilet paper before the coronavirus hit.

After the crisis is before the crisis. Armed with this knowledge and the corresponding measures, it should be possible to correct too high a risk tolerance in globalization and shift critical production, e.g., for active ingredients in medications, to uncritical locations. However, the example of the much-needed protective masks during the pandemic shows that this is probably easier said than done.

A third argument that is not linked to the trade war or the coronavirus is becoming more and more widespread in the media. China is increasingly portrayed as a country that wants to dominate the world – as a state-capitalist one-party system that lacks any democratic legitimacy. Huawei, the Hong Kong Security Law, and Internet censorship are listed to paint the threats to the Western world.

At a time when the United States of America with their ‘America First’ can no longer (strive to) fulfill their original role as a force for order and Europe as a whole cannot speak with one voice, China is filling the vacuum and taking the initiative. Moreover, Chinese science and business can now take the lead in certain key areas. The government strategy and financial resources to do so exist.

Is the right response to this development to erect more trade barriers? The government there will not listen to warnings from Europe. Economic sanctions are ineffective. Europe, and Germany in particular, cannot afford trade restrictions with China. That is why Chancellor Angela Merkel’s dealings with Chinese government officials must be described as extremely prudent. The measures taken to make it more difficult to transfer technology and know-how in the event of company takeovers are more effective and do not call into question the fundamental economic cooperation.

Another event to strike at the very core of Europe is the influx of migrants from Afghanistan, the Middle East, and Africa: Does society want to integrate migrants, or is sealing them off the better strategy? The burgeoning xenophobia in many countries is also used as an argument against globalization.

However, the issue of how to deal with migration has nothing to do with the issue of globalization. And vice versa: abandoning globalization will not stop the flow of migrants. The cost of a humanitarian solution to migration, on the other hand, can only be financed if Europe and Germany continue to be able to make savings in the global competition between economic areas. 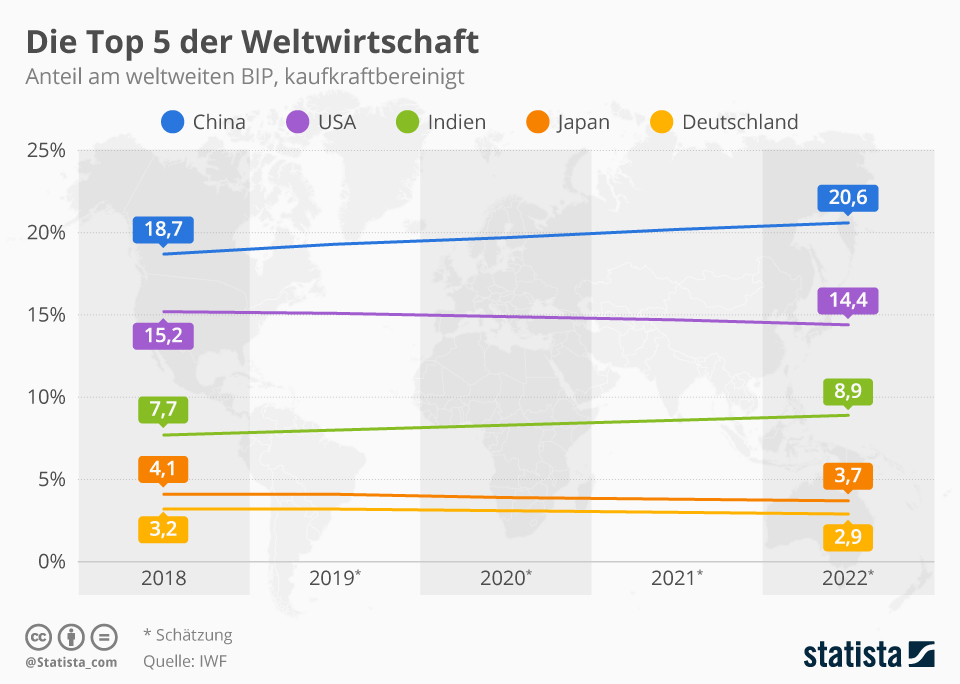 What is the answer to the question of whether globalization has a future?

The debate about whether or not China has the right political system will get us nowhere. China has proven that it can feed its population (1.4 billion people) and has brought prosperity to the majority of the population. Moreover, it has undertaken structural reform from an agricultural to an industrialized state. Its national economy has fought its way to the top of the world’s largest economies – and it is still rising.

The future and opportunity to secure our prosperity through coexistence lies only in our competing regimes and cultures. That is not possible without globalization.

In order to secure their position in the world, Europe and Germany must become more efficient and faster. Only that can help companies compete globally.

How can Europe and Germany become more efficient and faster?

The democratic structures in Europe and Germany must adapt. Democracy is synonymous with pluralism and reflects a diversity of opinions. However, this precious achievement is coming under increasing pressure as democratic decisions take a lot of time to prepare, and majority decisions are increasingly not accepted by any stakeholder group. By involving more authorities and courts, the implementation of important decisions is becoming increasingly slow, even though they should actually be made under great time pressure. The struggle of EU countries to reach compromises, such as on the EU coronavirus aid package, is a clear example of this.

Another example is the discussion on refugee admission quotas in EU member states. The much-hyped unity at the end of such decision-making processes fits into our value system, but not into global competition, where the participants operate at different speeds.

In 1949, Germany opted for a broad federalist structure when redesigning its government. This decision can certainly be seen in the context of the history of Germany since Napoleon, including the history of the Holy Roman Empire of the German Nation. In the age of global economic and political structures, federalism in its present form should be put to the test. What has already been said for the EU also applies to this democratically federal structure: Majority decisions are normally not accepted by the opposition at any level; therefore, it takes a very long time to prepare policies. Plus, their implementation fails or is delayed due to stakeholders’ objections. A good example here is the course of the coronavirus crisis. Initially, the Chancellor was able to implement a clear package of measures to deal with the crisis; however, two weeks later, the states were divided about the adequacy of the measures. Moreover, there are countless examples of large-scale projects that have been implemented with great delays or have failed due to the complexity of the decision-making structures. The “Digitalization in the Education System” project alone illustrates this, especially since the coronavirus crisis revealed the actual situation. A comparison with Asian countries shows exactly where we stand. We are too slow.

We are talking about billions in public funds, which should now finally provide relief in many cases (digitalization in health care, education, public administration, transport and traffic, security, fiber optics as an infrastructure measure, hydrogen technology for climate protection, research funding, etc.) as a package of measures. Obviously, the crisis was needed to convince the various groups of stakeholders that there is a considerable need for action. Also because of the coronavirus, but above all due to our position in the global market.

We need more speed and timely investments in key areas in order to maintain our unique position as a successful national economy internationally.